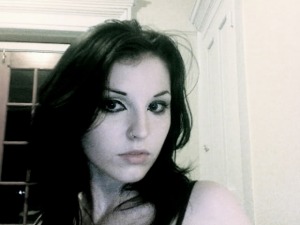 I like a lot of what she likes myself–especially in terms of gothic tone, hot androgynous men, cross-dressing men and all over pluviophile joys.  I want to write a hot gothic horror romance just for her.

I get angsty now and then about my own writing because it’s a bit off the beaten track, but Madeira is all about reveling in what you like and licking your fingers clean when it’s done.

I wonder if Madeira likes AMERICAN HORROR STORY? AHS is a new obsession of mine, though as always, I’m way late to the party on this one.  In general I am more of a fan of creepy sexy suspense than I am a fan of true horror. I’ll admit to fast forwarding through great swaths of AHS the first season as well as season three: Coven.

With the first season, for me it was all about the young love story.  I liked the he’s-not-a-bad-boy-he’s-just-misunderstood story line in season one.

Whups! Turns out he really *is* a bad boy, but we know exactly why and how he got turned along the way, and at the end he is as redeemed as he can be given his situation.

With Season Three, Coven,I like the way that they bring back the same actors in different seasons–making it a theatre ensemble.  That is so cool.  Season three is my favorite if only because it’s all about girl power/women’s power and that really turns me on when you make it witchy and wonderful.

I think it was a little less squicky overall–perhaps because they knew that they’d have a younger teen audience tuning in?  Again, the romance story hooked me hard. There’s something just so good about the sweetest romance ever that falls like an egg off the counter, and there it is, cracked, the sweetness leaking out all over the ground, marred and un-fixable.  It’s the best thing EVAH!

Then there’s Bates Motel.  Another wonderful mash-up of tension, suspense, sex, and shame–with a glittery sprinkling of innocent curiosity over the whole.  Yum! I could eat it up with a spoon.

What brings you perverse fragrant joy in this spam-in-a-can society?  Share with me your fav cult books that celebrate young love gone splat in a world gone dark.  Bonus points for romance titles. Here are a few culty-favs of mine below.  Warning: this is difficult reading hour presented to you — none of these are glossy romance titles.  These are cult-hugs sent to you like a late valentine on a blizzard-y winter day.  Mmmmmwhaa!

NP — Japanese incest wrapped up in a minimalist ghost story

One thought on “Horrifically, Perversely Romantic: Madeira Darling After Party”