I’ve been reading an interesting book on empathy by Simon Baron-Cohen. 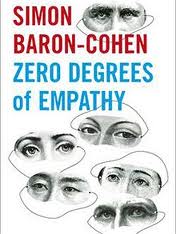 (In case the name sounds very familiar, Simon is the cousin of Sasha Baron-Cohen, from Borat fame.  Who is kind of hot, btw. Tho he seems like he tries his best to hide it–which just makes him MORE hot.)

At any rate, Simon, the scientist cousin, says in his book that some male test subjects are much less empathetic than the general population when it comes to strangers or people they don’t like.  These low-empathy men sound like the “cold, arrogant hero” guy in a romance novels.  You know this guy.  He cares for nothing and nobody until–he meets the right girl.  Suddenly, he actually cares about someone for the first time, ever.  This guy actually exists in real life. I’ve met him–he’s completely selfish and shameless about it.  Except for his beloved & children, he only thinks of himself.  Yet for them he will annihilate the rest of the world to meet their needs.  They are an extension of himself.

Meanwhile, Simon says there’s speculation that some people are born with a gene that can possibly affect their levels of agression.  It’s a so-called “warrior” gene mutation.  I looked it up. It’s complicated, but basically, the idea is this: we all have a certain chemical in our brain that help break down other chemicals.  It’s called MAO.  Think of this MAO chemical as the barkeep who at the end of the night says to all the other brain chemicals in the bar, “Folks, you don’t have to go home, but you can’t stay here.” This barkeep chemical (MAO stands for monoamine oxidase) then sweeps out the other rowdy brain chemicals (neurotransmitters like serotonin, norepinephrine, and dopamine.) These chemicals keep you pumped full of energy, focussed, and in a state of arousal.

If the MAO doesn’t sweep out the rest of the chemicals bumping about in the brain, aggression is much more likely to occur in the subject.  So folks with this genetic mutation can be much more aggressive because their genetic mutation causes them to have naturally occurring lower levels of MAO.  This was good back when warriors were fighting huns, not so good if you’re a male living in our modern society.

Now, as someone who just can’t seem to stay angry for a long time, I can see how this might be an extremely useful trait.  After all, I’d be no good in a fighting situation against evil beings.  I’d fight for awhile, but soon I’d be like, “Hey guys, can’t we all just get along?” The bad guys would say, “Sure, let’s all just put down our weapons,” And I’d be like, “Oh, good, ’cause I’m tired of fighting.” Then wham! — that’d be the end of me.  However a person with the warrior gene wouldn’t want to put his weapons down. Someone born with this mutation could just keep fighting, and fighting, and fighting…a very good warrior quality to have.

Yet, as I was reading along, things started sounding strangely familiar.  I was thinking about WRATH from J.R. Ward’s Black Dagger Brotherhood Series. (A series with which, as you must realize by now, I’m completely obsessed.)  Wrath cares about nobody.  He stomps people he doesn’t like, and he could give a damn about the rest.  He can fight without rest, and without mercy.  Someone who seems so aggressive and without empathy in general can, according to Simon the cousin, still have empathy towards another.  Thus, when he meets Elizabeth, he’s drawn to her.  Their instant intimacy and super-hot sex bonds them together so that very soon she’s not a stranger anymore.  He feels a huge amount of empathy towards her–an anxiety over any suffering she may experience–but he still could give a rat’s ass about almost anyone else. (Sorta. Things can get sentimental occasionally amongst the brotherhood.)

It seems like science is catching up with what romance authors and paranormal romance authors especially have known for quite awhile now.  Feminists may be clutching their buzz-cut hair at these retrograde alpha-male portrayals, but up until about five minutes ago historically speaking, we needed warriors to prevent rape and pillage by invaders.

We also needed to have babies with these warriors to pass on their genes to our sons so that we could continue to be safe from rape and pillage in future years.   A guy who has no empathy and is all aggression would be a good fighter, but a horrible husband and father.  He wouldn’t pass on as many genes if he was bashing around wife and kids as the guy who can fight the live long day–but still have this one little notch in his brain helping him be Mr. Good Hubby to his beloved and practice restraint around his offspring.

The thing that science hasn’t figured out yet is this: do we women have a corresponding gene in us that’s looking for Mr. Warrior Dude? I bet there is.  I mean, it’s a lot of women out there buying J.R. Ward novels.  Most of us can get quite steamy and curious only thinking or reading about a warrior protecting his heroine and loving only her.  In historicals this is the cold rake who marries the woman who “wasn’t his first lover, but will definitely be his last.”

And I wonder a lot about female aggression too.  Is there a version of this gene in women?

Meanwhile, I wonder if this gene going to disappear from men? Think about cops.  Yes, sometimes they have to be aggressive, but it seems that these days they spend most of their time doing paper work or trying to talk folks down in order to keep the peace.  Meanwhile, think of how technology driven war is these days–and getting more so all the time.  The place for warriors is shrinking down rapidly.

Yet in the world of paranormal romance, there will always be a place for someone who can stomp the bad guy without thinking twice, but who can be tender and empathetic with that one special woman.  A man who can quell evil with one hand tied behind his back.  A man who can last, and last, and last.  If you know what I mean.  And I think you do. (Smirk.)