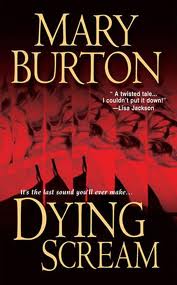 I’m ready to scream this morning after tangling myself up in Facebook for over an hour. Does anyone really understand how those wacky author pages work?  I’m taking a breather to do something fun — like chatting with you about Mary Burton’s, DYING SCREAM.

Now, this isn’t Burton’s latest book.  Her latest book is THE SEVENTH VICTIM.  DYING SCREAM came out in 2009, but I picked it up last year and plunked it on my TBR pile (Which is so toweringly high I give one of those silent Edward Munch screams every time I peek at it.)

DYING SCREAM is my favorite Burton novel to date.  This book reminds me of an early Mary Higgins Clark. There’s a hard working heroine named Adrianna who’s pretty perfect.  Normally, I’d not be very sympathetic to Adrianna as a character, but life has handed her a heavy load to bear for the last few years and you’d need to be pretty perfect to keep chipping away at all the problems in it, as Adrianna has. As she’s working through a massive heap of both emotional and work-a-day world woes, you wonder if they will ever end–and that’s just when the spooky-creepy factor starts to build.  Adrianna gets a loving note, but it’s from her dead husband.

What I like about Burton’s skill in this book is that once that fear of a crazy stalker sets in for Adrianna, she starts thinking back.  She’s perhaps been too busy to notice, but maybe he’s actually been around for awhile.  The ripples spread far and wide in her mind as uneasiness spreads to all areas of her life.  Being an extremely busy woman, she’s not exactly surrounded with people to support and protect her.  It’s more like she’s alone in an empty dark building at night, counting out cash and paying bills. I certainly can relate to this workaholic scenario of tired isolation. I really enjoyed the way Burton started cranking the tension from there.  She also does that really good Higgins-Clark move of providing a wide array of male suspects who are both appealing and likeable, yet they all have a little kink in them that could potentially reveal something nasty.

The cherry on top for me in this book was Gage Hudson, detective as well as Adrianna’s former love interest.  The writing Mary Burton does around these two in their moments of sexual intensity were SO DAMN GOOD.

That’s all I’m going to say.  It’s a romantic suspense thriller after all.  I wouldn’t want to spoil it for you.  Meanwhile, you can see Mary Burton in person this year at The Virginia Festival of the Book in March.  On Saturday, March 23rd, she’s appearing over at Crime Wave but she’s also on a panel at 4pm called KISS KISS BANG BANG.  Writers on this panel will talk about romantic suspense and how to injecting that romantic intensity into works of mystery.  I’m definitely going to ask Mary about how she makes her wound up readers melt.  There’s a book signing right after the panel, and you can find the details here.